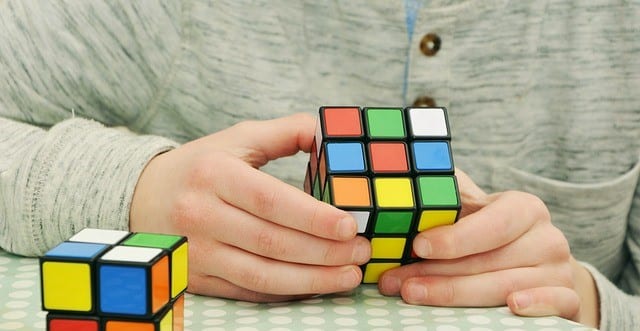 Everyone knows at least one puzzle that was actually harder than it looked. However, that sort of trick is used to characterise a wide range of problem-solving challenges that appear simple at first glance but are actually very hard to solve. The Rubik’s cube is one of the most well-known examples. Surprisingly though, this trope sees heavy use in other mediums from escape rooms to video games.

Have you ever wondered about how first-timers get easily fooled?

The answer is that a lot of it has to do with certain design elements of the puzzle. Many of these deceptively easy-looking challenges have a lot of these in common.

1. Minimalist on the outside, complex clockwork on the inside.

When you hear the term ‘minimalist design,’ it generally refers to an art style that focuses on simplicity. This can be a puzzle sphere that is of a single colour, or a room that doesn’t seem to have anything but a single book on an innocuous, white table.

In reality though, the minimalist design often serves as the perfect disguise for a complex setup of puzzle pieces that you actually manipulate to solve. For example, that single sphere may in fact be a transforming key. The simple room may actually have hidden switches or pressure plates virtually unseen to the naked eye.

It is actually one of the oldest tricks in the book as far puzzles go but it is certainly no less effective in confounding challengers.

This one is something of an opposite to #1. Instead of coming across as simple, the puzzle’s aesthetic is painted in silly, cartoonish colours that makes it hard to take seriously.

But just like a minimalist puzzle, this type of clownish or gimmicky design is just as clever a disguise. The classic video game Tetris is one very good example. For despite the game’s status as an icon and its retro-arcade looks, it remains one of the most challenging digital puzzles to date.

Likewise, there are escape rooms that can classify themselves as very family-friendly and feature characters or stories suitable for all ages. That doesn’t necessarily mean the puzzles won’t demand surprisingly difficult solutions (like designating a very challenging puzzle for adults while the kids can be assigned to do the simpler tasks).

3. Illusion of the almost complete solution.

Another trick is to present the problem in a way that it almost appears solved. For example, you can have a lock with a key already set to open it, or an arrangement of books that look like they just need that big red one lying at the foot of the shelf. When you attempt the seemingly obvious solution however, either nothing happens or the room’s real challenge is revealed.

Sharper minds might think there’s some trick but even those minds can be fooled with you put some form of pressure on them (like a time limit).

It certainly makes for a very nice twist if you find it placed right near the end of the challenge where the excitement is high, success seems so close but the clock is still ticking. On the other hand, it can also be placed at the very start and give puzzle challengers a nice appetizer on what other unexpected tricks await them ahead.

Overall, if there is one thing that these visual tricks can teach you is that it never fails to think twice and take another look at the problem. (Incidentally, this makes for not just good puzzle solving technique but can go a long way to helping you in life as well!)

Why not try some puzzles out in one of our rooms. Book now

A real-life adventure where players are actively challenged to exercise their powers of reasoning.

Players solve a series of puzzles in order to escape the room before time runs out.